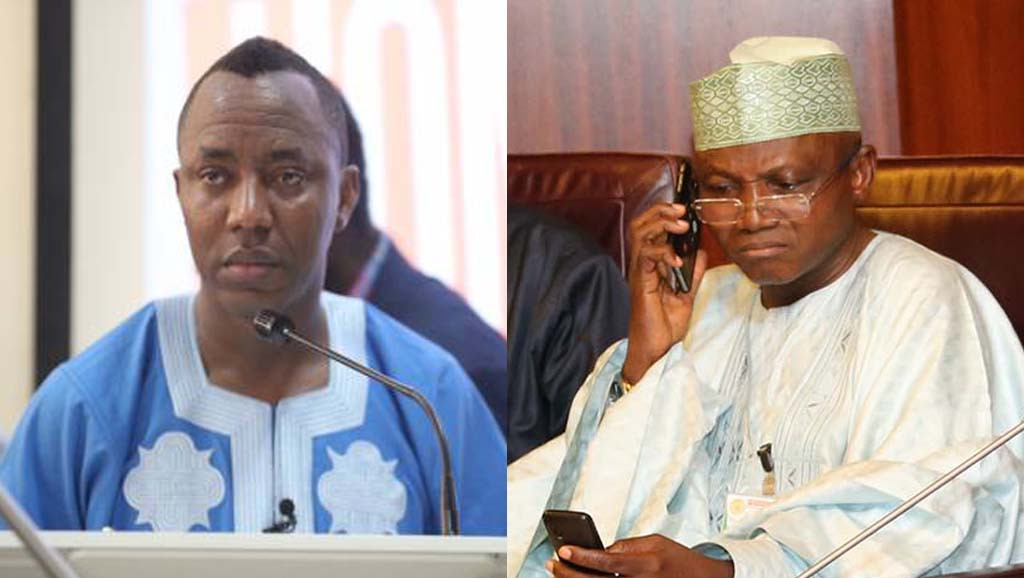 Omoyele Sowore has dared Garba Shehu to release the tapes of his encounter with late Isa Funtua, Abba Kyari , Garba Shehu and others.

NAIJA NEWS NG reports that the publisher of Sahara Reporter had earlier claimed that late Isa Funtua , DSS agents, Newspaper publishers Sam Amuka and Nduka Obaigbena of ThisDay Newspapers had visited him prison to ask him to drop his RevolutionNow movement .

Garba Shehu responded on his Facebook page threatening to release the recordings of the meeting .

“Let’s get the facts straight on the meeting with Sowore in SSS detention. First, it is important to state that the meeting was not instructed by the government. Nobody sent anybody to go and negotiate Sowore’s freedom as he put it.

“The late Malam Isma’ila (Funtua), on his own called me to ask that I broker a meeting with him and two others with the SSS, which they agreed to. It is important that I state that it was the force of Malam Isma’ila’s argument that made the meeting possible.

“Vanguard Newspapers publisher, Sam Amuka and ThisDay Publisher and President, Nigerian Press Organisation, Nduka Obaigbena, all agreed that Sowore was a ‘rascal’, who had used his newspaper ‘to abuse all of us,’ but agreed, nonetheless to go and press for his release.

“The meeting ended well, and contrary to the posturing by Sowore, he said he was happy with a resolution proposed but that his lawyer, whoever that was, needed to come on board. The fence-mending process apparently collapsed after the meeting of the trio with the lawyer in Lagos.

“Knowing the way the secret service works, it should surprise no one if they keep a recording of that meeting. Faced with this posturing and the unfair attacks on the dead, we certainly will be forced to ask for the release of tapes, in case they are available for the public to judge.”

Omoyele Sowore replied Garba Shehu daring him to tell DSS to release the complete tape of the encounter.

Earlier this evening Buhari’s spokesperson Garba Shehu responded to my video where i described my encounter with late Isa Funtua, a member of Buhari’s cabal who led a delegation including Garba Shehu to meet me in detention apparently to pressure to abandon #RevolutionNow

It is important that contrary to Mr. Shehu’s vituperations, this video was an excerpt of my Instagram intervention with journalist, Seye Kehinde while Isa Funtua was still very much alive.

I responded to Garba Shehu on twitter as below:

1. Glad you admitted you led a delegation to meet me in DSS detention because the delegates said you arranged it. #revolutionNow

2. It is very true that I was nice to your team because you weren’t my problem, you were just an errand boy. In fact I patted you on the back saying I had never met you before and fairness, you were respectful but I knew you were there on a hatchet job.

I urge you to release the tape, but don’t forget to release tapes of convos between COS Abba Kyari and DSS DG asking that my detention should last for the duration of the @MBuhari regime in 2023 because @saharareporters did a report that revealed that he collected N500m from MTN.

Garba Shehu Why can’t you be honest for once in your life, when you came to meet me in detention what was your intention, what would have constituted the conditions for my release? Who would have ordered my release, Isa Funtua? What powers did Funtua have to get me released?

My insistence then got Isa Funtua riled and he said that my lawyer was only grandstanding and that he too had been imprisoned by Buhari in 1983 and that no one can defeat the government. Your wicked self kept quiet but Nduka noticing I was upset took me to the DO’s ante room

When I arrived downstairs I made a telephone call to my lawyer, Femi Falana in the presence of the DSS officials telling him that I do not want to negotiate my freedom and that when he meets your team he should restate my position, he did exactly that, your team got upset again.

Soon as I made that call to Falana I was stopped from ever making any further calls until my continued detention became an INT’L issue, I was then offered a bugged cell phone with which I granted an interview to @PremiumTimesng, while I was calling my family the phone was seized.

Please also present a tape of your meeting my lawyer in Lagos, because he told your team that asking me to renounce #RevolutionNow would amount to suicide, because o expressly told him that was the plan but that we can’t go back on #RevolutionNow!

TINUBU : Yorubas React To Ngige’s Statement On The APC Leader

FUNTUA : Nnamdi Kanu Reveals The Next Two People To Die In Aso Rock