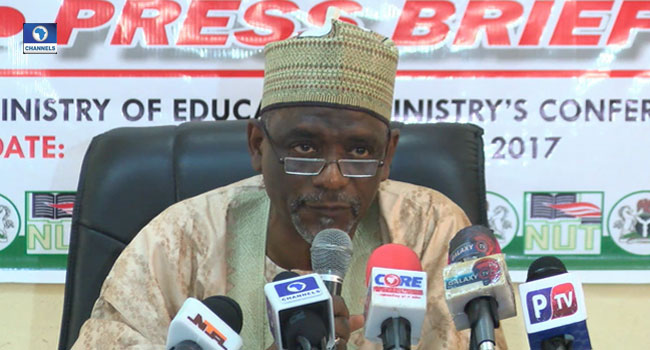 Adamu Adamu the Minister of Education has said the re-opening of schools in Nigeria amidst the second wave of COVID-19 was forced on them by state Governors.

NAIJA NEWS NG reports that Adamu Adamu had last week said they were reviewing the 18th of January date of reopening schools due to the second wave of the pandemic but later approved the said date on Friday, 15th of January.

The approval was greeted with backlash from Nigerians. To clarify the reason he approved the date, the Minister of Education while speaking on 18th January at the daily briefing of the Presidential Task Force on COVID19, said his ministry had reservations about the 18th January date re-opening of schools but had to compromise since the Federal Government only controls only 100 schools out of the thousands of schools under state control.

“We sat down, looked at the figures and we took the decision that schools should not open. Unfortunately, we have to state this because it is supposed to be a collective decision, but you must understand that the schools we are talking about, the Federal Government has only about 100 out of thousands of schools.

The schools are under the jurisdiction of states and just as the PTF was unanimous in saying that schools should not open, states were unanimous that schools should open. So, we have to compromise and as PTF we shall monitor what is happening on a daily basis. There could be some review again”