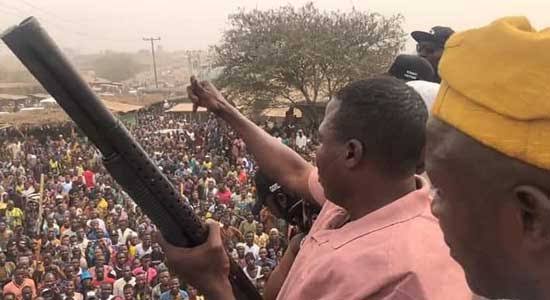 After the Inspector General of Police ordered the arrest of Sunday Igboho , Nigerians from the South have expressed anger on Twitter .

NEWS MAIL NG reports that Sunday Igboho is trending on number one on Twitter since his arrest was ordered. Below are the reactions from Nigerians .

“I’m shocked that the IGP ordered for the arrest of Sunday Igboho but didn’t order his men to enter the bushes of Ibarapa North LG & fish out killer herdsmen & kidnappers.

True, Igboho’s outbursts are capable of causing anarchy, but you can’t go after him & ignore the terrorists.”

“Can anyone show me the report where the IG of
@PoliceNG
ordered the arrest of Sunday Igboho, I like to read it because he did not order the arrest of this miscreant.”

Kelvin Odanz
@MrOdanz
“When Arewa Youths/elders gave the Igbos an ultimatum to leave the North, the ringleaders of the eviction notice should have been arrested.

It would have justified the arrest warrant for Sunday Igboho who for an illegal eviction notice.

But the man in Aso Rock is a daft bigot.”

“At this point, I think the Southwest Governors should come together and make Sunday Igboho the Head of Amotekun and empower the unit appropriately to secure our forests. We must be very strategic in this fight against the kidnappers and rapists that have invaded our land.”

Unu Amaro Kam Siri Kwado
@AfamDeluxo
“In Oyo state, one man, Sunday Igboho, is marking & tackling the Fulani herdsmen, but I am yet to see Yoruba intellectuals bash him & remind of how he is beatng drums of war. I am yet to hear anyone remind him Nigerians deserve to live anywhere. I will keep pointing it out.”

“Do you people remember how during lockdown 1 million boys were running wild in Lagos and the people had to form street vigilantes to repel them at night because police couldn’t?

Sunday Igboho is fighting the 1 Million boys in Oyo bushes to protect his people.

“The IGP has ordered Oyo CP to arrest Sunday Igboho and bring him to Abuja. Mr IGP, what about giving similar order to Borno CP on Shekau, the BokoHaram leader?”

“I wonder if and how Sunday Igboho will be arrested.

“Why is the arrest of Sunday Igboho ordered

I still remember a time when a particular sect ordered igbos out of their area, I couldn’t find evidence of them being arrested

Please explain it to me like I’m 5. No insults please. Just explanations.”

“The current Asiwaju of Yorubaland is Sunday Igboho. The one you are referring to is Asiwaju of a political party.”
Quote Tweet
Henry Shield
@henryshield

“Has the Asiwaju of Yorubaland and acclaimed Leader of all Democrats spoken in defense of his people yet?”

“In the face of crisis, the people look up to their leaders to save them and when they don’t unexpected leaders emerge.

This is the case of Sunday Igboho.

If our leaders refuse to deal with the issue of Fulani herdsmen, the people will begin to save themselves!!”

The IGP should be seen to deescalate the situation by hearing and inviting all sides.

The IGP should find out. Were there really kidnaps, killings by Fulani Herdsmen etc. He should investigate.

Also, his fellow yorubamen will betray him”

“The Fulani people are funny. You cause so much destruction and terrorize people in their own backyard yet you’re surprised why no other group is willing to tolerate you. No matter how you see it, people like Sunday Igboho are a necessary evil. No one has the monopoly of violence.”

“The IGP will have to explain to Nigerians why he is ordering the arrest of Sunday Igboho and did not order the arrest of Abdul-Azeez Suleiman, the spokesperson of The coalition of northern groups who threatened the whole nation on
@channelstv”

“When a govt sleeps while its people are abducted & slaughtered, the emergence of people like Sunday Igboho is inevitable.

All the noise from the Oyo Gov against Igboho’s boldfaced declaration is just to save face. Wake up to your responsibility or watch a commoner take charge!”

“The way Arewa will die to defend Buhari is the same way we Yoruba must stand for our champion Chief Sunday Igboho. I was first a Yoruba man before a Nigerian. We must put an end to encroachment of territorial integrity and threat to life in our Land.
#SUNDAYIGBOHO”

He went to report to their Seriki

Seriki tied him down and sliced him to death…

Sunday Igboho is fighting back cos the system is not working!!

I Stand With Sunday Igboho O!”

“It’s okay when Miyetti Allah threatens Nigerians on accepting RUGA or Igbos are asked to leave Kano but it’s not cool when a Sunday Igboho gives a marching order to killer Fulani Herdsmen in his community.

May Political correctness choke you.”

“You have been lamenting for protection from the Government for very long time. Govt did nothing. Sunday Igboho is out there doing what the government should do. But you’re on Twitter him calling names. Any Yoruba persons speaking against Sunday Igboho is OMO ALE.”

Related Topics:Nigerianssunday igboho
Up Next