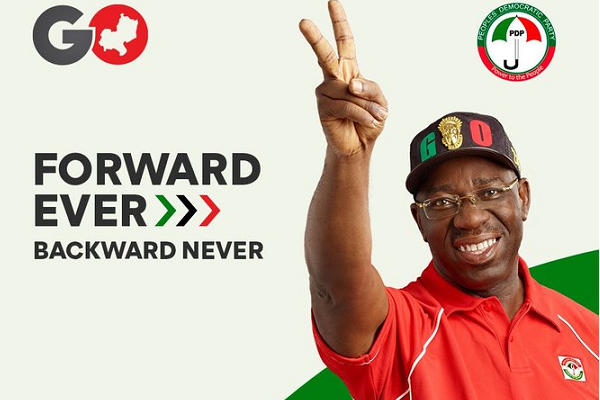 Tony Usidamen, a public affairs analyst writes to reveal the only sin Godwin Obaseki committed that made Adam Oshiomhole go to war with him.

NAIJA NEWS NG brings the full text of the article. Read below :

If you have been following events on the Nigerian political scene, then you would know about the protracted battle between the erstwhile national chairman of the All Progressives Congress (APC), Comrade Adams Oshiomhole, and the incumbent governor of Edo state, Mr. Godwin Obaseki . The feud cost the former his exalted position in the party and forced the latter out. But what is the real cause of the rift? What is Obaseki’s grave sin? Well, I’ve got answers.

Here’s how it all started. Following Comrade Oshiomhole’s tenure as president of the Nigeria Labour Congress in 2007, he had more or less settled into private life when a few Edo professionals who were dissatisfied with the quality of governance and the socio-economic condition of the state reached out to him. They prevailed on the former union leader and dogged fighter to wrest power from the political elite by running for the office of governor. He acceded.

Numbering twenty, these well-meaning sons of Edo mustered up the funds to prosecute the election. They backed the Comrade all the way to the Court of Appeal, which—on 11th November 2008—upheld the 20th March 2008 judgment of the State Election Petition Tribunal declaring Oshiomohle the duly elected governor of Edo. The court deemed that he had polled the highest valid votes in the 14th April 2007 elections. Mr. Godwin Obaseki led that group.

When Oshiomhole assumed office, he understood that a clear vision of the future was necessary to guide the journey of change. So, he set up an Economy and Strategy Team (EST) to assist in developing a comprehensive roadmap that would ensure a better, more prosperous future for all Edo citizens. And, to lead this critical task, he called on Mr. Godwin Obaseki . For seven and a half years, he served the state diligently. May I add that he did so without requesting a dime?

Before that time, Edo was akin to a rudderless ship on a shoreless sea. The privileged ruling class was divorced from the realities of the masses. At best, they saw their office as a means for self-enrichment. And you could feel the people’s disillusionment with the machinery of government. But under Oshiomhole’s leadership and Obaseki’s guidance, Edo was transformed from a disarticulated political structure to one with a sense of mission. There was renewed hope.

It came as no surprise, therefore, that the Comrade Governor found in Godwin Obaseki a worthy successor. His background as an investment management expert of over thirty years, and the experience garnered as chairman of the EST, had prepared him well for the task of governance. He had a firm grasp of the issues confronting the state, and had articulated a clear vision. Edo people concurred. And—at the September 19, 2016 polls—handed him the mandate to lead.

Since his inauguration on 12th November 2016, Governor Godwin Obaseki has continued to demonstrate that government can, indeed, work for the people—with policies and programmes that benefit the majority, rather than a few. His strides across the six focal areas—institutional reform, social welfare enhancement, economic revolution, infrastructure development, environmental sustainability, as well as culture & tourism—are visible for all to see.

While Edo can’t be said to be El Dorado—the fabled city of gold where everything works—the state has made real progress in critical areas of human development. Citizens have greater access to healthcare, as primary healthcare centres are being revamped and upgraded statewide. The quality and enrolment rate of school-age children in public primary schools has increased, thanks to the reforms in basic education. And there has also been a boost in Technical and Vocational Education and Training. Young people are being equipped with vital skills to make them more employable or to start their own business.

According to data obtained from the Edo State Skills Development Agency, and verified by independent agencies, an estimated 161,271 multi-sectorial jobs have been created (as at the time of writing this piece). The bulk has been from the state’s agriculture development programmes. Under this administration, salaries of civil servants are regular and prompt. Arrears of pensioners, dating back to 1996, have been cleared. And monthly pensions and death benefits are paid as and when due. Also, there are massive infrastructure projects ongoing across the state. And marked progress has been made in sports development.

So—now that we know the history that both men share, and have a clear picture of happenings in the state—what grievous offense did Godwin Obaseki commit? To have made him an outcast in a party on whose platform he emerged governor? From all the Comrade and his loyalists in the APC have said in public, nothing remotely suggests that Governor Godwin Obaseki has failed in his duties as the chief executive officer. That would not be consistent with the glaring record of achievement. The only coherent tune from the cacophony of voices is the lack of patronage from the governor.  And that says a lot about the values of our leaders.

Obaseki’s grave sin—it seems—is putting the interest of Edo people before those of entitled politicians, his refusal to channel public funds into private pockets. That is the paradox of the Nigerian society. It goes against the principles of democratic governance, which—as American civic activist, Nick Hanauer, puts it—is to maximize the inclusion of the many to create prosperity, not to enable the few to accumulate money. Indeed, the loyalty of elected public officials should be to the people, not self-acclaimed godfathers. Governor Obaseki has modeled this over the last three years. And Edo people are the better for it.

In reality, the fight is not about the person of Godwin Obaseki ; it is a struggle for the “heart and soul” of Edo. Political buccaneers—led by a former comrade-in-arms who has morphed into the same imperious figure he once fought against—are laying claim to the state’s treasury. But power lies in the hands of the people. And only we can determine our fate. We have the choice to go back to the biblical Egypt—where a few greedy men held the reins, and brazenly plundered our commonwealth. Or go forward to the Promised Land. That is, a modern and progressive Edo where every citizen is empowered to live life to its fullest. Choose Wisely!