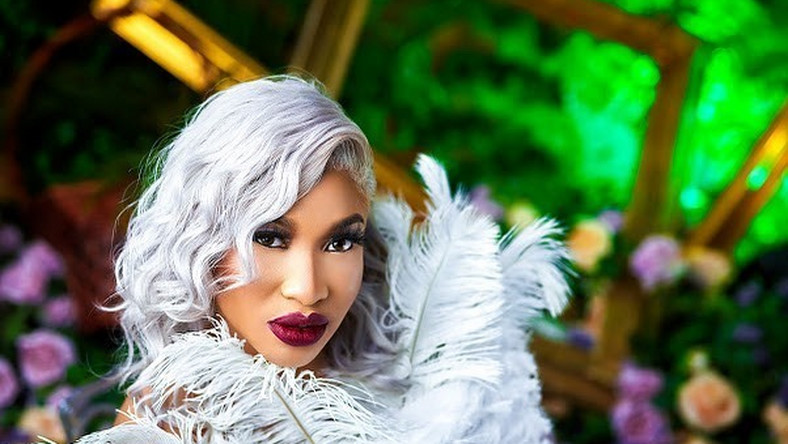 Tonto Dikeh has after an interview with Dele Momodu on Instagram where she said she has forgiven her ex-husband said all forgiveness do not need re-connection.

Tonto Dikeh was interviewed by Ovation Publisher on Sunday July 26 on Instagram live. She shared her views on forgiveness and said she has forgiven the father of her son, Olakunle Churchill.

NAIJA NEWS NG reports that Tonto Dikeh said the forgiveness was not for him but for herself and their son, King Andre.

“A man I love and respect always, talked to me about forgiveness and I have come to realize that forgiveness is not about the next person.

Forgiveness is a whole lot and I only just realized that the bible says that if we do not forgive, God cannot forgive us. All these things are in the bible but it never really made an impact to me until someone really explained it.

So today I would tell you that for me it comes really easy. I forgive alot but I just don’t like to get provoked by the things that you do after it. I think forgiveness is an essential for ones growth”

Asked if there is anyone she would never forgive in her life, she said

As of today, there is nobody I hold a grudge on but there are people who I have forgiven but I would never have a relationship with again” she said

On forgiving Churchill Olakunle her ex-husband, she said:

“Oh yes, especially him. I forgive him and wish him the best, for my son’s sake. I do. Why not?”

She also said that she has been rejecting movie jobs because of Nollywood’s habit of stereotyping actors, to buttress her point she said Pete Edochie’s roles are always the same only his name changes in movies.

”Yes I did. I was one artiste who didn’t like to be stereotyped and Nollywood has this habit. If you watch most of Uncle Pete Edochie’s film, it never changes. Only his name changes. His words never changes, his character never changes, nothing changes. Sometimes his clothes even changes but his name is the only constant thing that changes. They always give him the same role all the time and I wonder why he takes it but then again he is a veteran so I am never going to question that.

I said that to say this. Sometimes when you are good at a role, Nollywood would want to impose that role one you . They would want to give it to you until the whole wold gets tired of your talent because you are playing just one particular role”

Tonto Dikeh seized the opportunity to clarify the narrative of the Dubai incident she had , she said it was not about drugs but about an argument she had with a security officer who called her a prostitute in Arabic language.

”Far from it. It was not drugs because if it was, definitely I would be in jail. It had nothing to do with drugs or alcohol even. I really don’t want to go into so much about Dubai because it is a place where I have a home now and I want to be able to enter Dubai freely after all of this and that is why I never really talk about it.

I was insulted by one of the guards. He said something very derogatory to me. He said it in Arabic, I think Lebanon. It’s called Sharamuta, its called prostitute, it means a call girl and I was not so dressed…I mean it was a show so I had like a very amazing bra inside and this blazers on top. To them, it is Haram when you are not dressed properly. So that is where all of the altercation started. That was the only problem. Anything asides that is just all wrong information. And also trying to film the situation. They said that was wrong” she said

To really explain what she meant when she said she has forgiven Mr. Churchill, this morning she wrote on Instagram saying she will “never ever ask for forgiveness” :

”YES, I SAID WHAT I SAID..
I forgive every single person who tried to hurt me(Knowingly and Unknowingly).
I deserve all the good things of life so yes I do accept the gift of forgiveness..
Yes you may not DESERVE/Or asked for my forgiveness but I’m giving it anyways not for your sake but FOR MY GROWTH..
Because I love myself so much, I am giving myself a chance to also be forgiven by my Heavenly Father!!
Ooo No I AINT asking for forgiveness in return, NEVER EVER WILL..
I am doing the right thing just for ME PERIOD!!