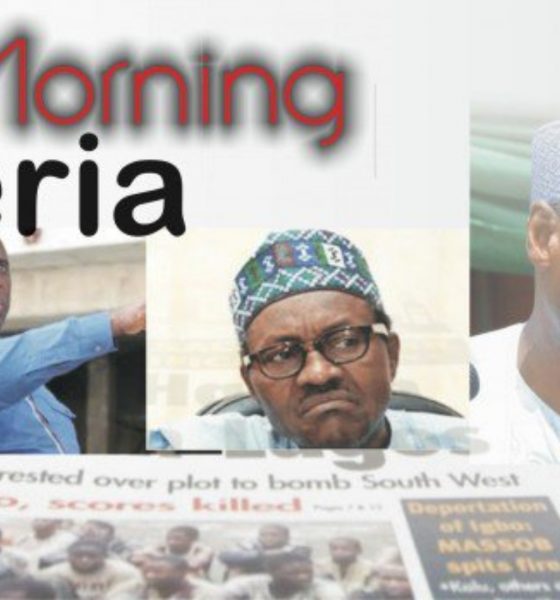 Here are the top headlines of Nigerian Newspapers online for today June 26th 2020 .

2- AJIMOBI : Video Of How He Prayed To Die At 70 Surfaces

Naija News NG brings you the video of Ajimobi saying in Radio program that he once prayed to God to die after 70 years old . He said it on Splash FM during the last Ramadam season.

“When I was 40, I started telling God that when I clock 70, it is enough,” he told the Imams in Yoruba Language.

“My father died two months before his 70th birthday. So I started praying to God that I should get the grace to clock 70.

Seyi Tinubu has welcomed his second child with his wife, Layal Tinubu. This time the Tinubu family is celebrating the arrival of a son.

The chairman of Loatsad Promomedia Ltd welcomed a son a few hours ago in a London hospital.

According to a family source who spoke with Naija News NG , both mother and child are safe and doing incredibly well in London .

Like any responsible man, the younger Tinubu was with his wife when she put to bed giving her all the necessary support required for smooth delivery.

4- HUSHPUPPI : Watch Video Of How SWAT Arrested Him In Dubai

Hushpuppi being arrested by SWAT in Dubai is no longer news, here is the English version of the video of how he was arrested.

Naija News NG brings you the English version of Dubai police released video of how Hushpuppi was busted .

Angela Nwosu the popular Facebook user and Amadioha worshiper, has hit the bull’s eye again with her controversial statements .

Remember she once said said that her fiancé must take some bath in a river for three consecutive days to qualify to marry her.  She is now married and her life is full of luxury , joy and adoration for her husband, Soundmind .

Naija News NG reports that Angela Nwosu is back on the front page with another controversial statement , this time Angela Nwosu said she is a Witch and has created a witchcraft coven strictly for women. She gave out the requirements needed for a woman who must be 23 or above to join.

AJIMOBI : Video Of How He Prayed To Die At 70 Surfaces