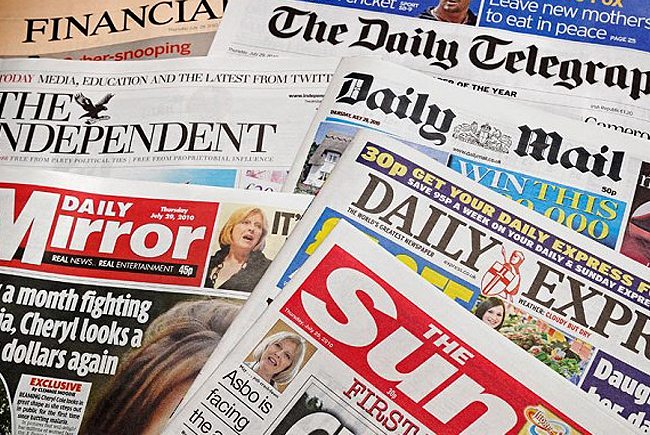 Here Are The Major Nigerian Newspaper Headlines.
1. #EndSARS: Protesters Run For Safety As Police Spray Tear Gas
Hundreds of youths(protesters) met their shock today as rather than get a chance to speak with the Inspector-general, Mohammed Adamu as requested, they were sprayed with teargas instead. The police fired teargas canisters at hundreds of youth who converged on the force headquarters to protest brutality and intimidation by the Special Anti Robbery Squad (SARS).

3. How Obasanjo Gave Senators N50m Each To Support 3rd Term Agenda – Kalu
Orji Uzor Kalu, former governor of Abia State has alleged that former President of Nigeria, Chief Olusegun Obasanjo gave N50m to each Senator in 2007 for them to support his third term agenda. He added, however, that unknown to many, Senator Ibrahim Mantu, the then deputy senate president was the person that worked tirelessly to scuttle the third term agenda.

4. Buhari Sacked Me To Cover Up Corruption Scandal At CRDBA, Eseme Eyiboh
The Chairman of the board of Cross River Basin Development Authority, Eseme Eyiboh, has been sacked by President Muhammed Buhari. Mr Eyiboh’s sack came about two months after the Minister of Water Resources, Suleiman Adamu, overruled the board on the suspension of the agency’s managing director, Bassey Nkposong, over an alleged corrupt act.

6. #EndSars: Moment LAUTECH Student Killed During Ogbomosho Protest Was Buried (Video)
Jimoh Isiaq, the Ladoke Akintola University of Technology (LAUTECH) student killed during the #EndSARS protest in Ogbomosho has been buried. The student was shot on Saturday while participating in the protests calling on the Nigerian government to immediately end the Special Anti-Robbery Squad (SARS), a controversial unit of the Nigerian Police Force.

8. #ENDSARS: Police Open Fire On Peaceful Protesters In Ogbomoso
Police officers in Oyo State have reportedly opened fire on peaceful protesters in the Ogbomoso area of the state killing one person. SARS have become notorious for extra-judicial killings, extortion and kidnapping across the country.

9. #EndSars: Davido Vows To Lead Protest In Abuja Tomorrow
Nigerian singer David Adeleke popularly known as Davido has promised to lead EndSARS protest. The singer in a tweet today, October 10, urged Nigerian youths to come out in masses, as he will be leading the End SARS campaign tomorrow in Abuja, October 11.

10. #ENDSARS: Buhari, Osinbajo’s Daughter, Zahra And Kiki Joins #EndPoliceBrutality Campaign
Zahra, one of the daughters of President Muhammadu has joined thousands of other Nigerians to lend her voice to the worldwide protest against the brutality of citizens by the Special Anti-Robbery Squad (SARS) of the Nigeria Police Force. Naija News Ng understands that Zahra lent her voice to the #Endpolicebrutality campaign via her Instastories on Saturday, October 10.

Related Topics:#EndSARSNigeriaSARSSARS reformation
Up Next

Buhari’s Government Budgets N336m To Fight Hate Speech And Others