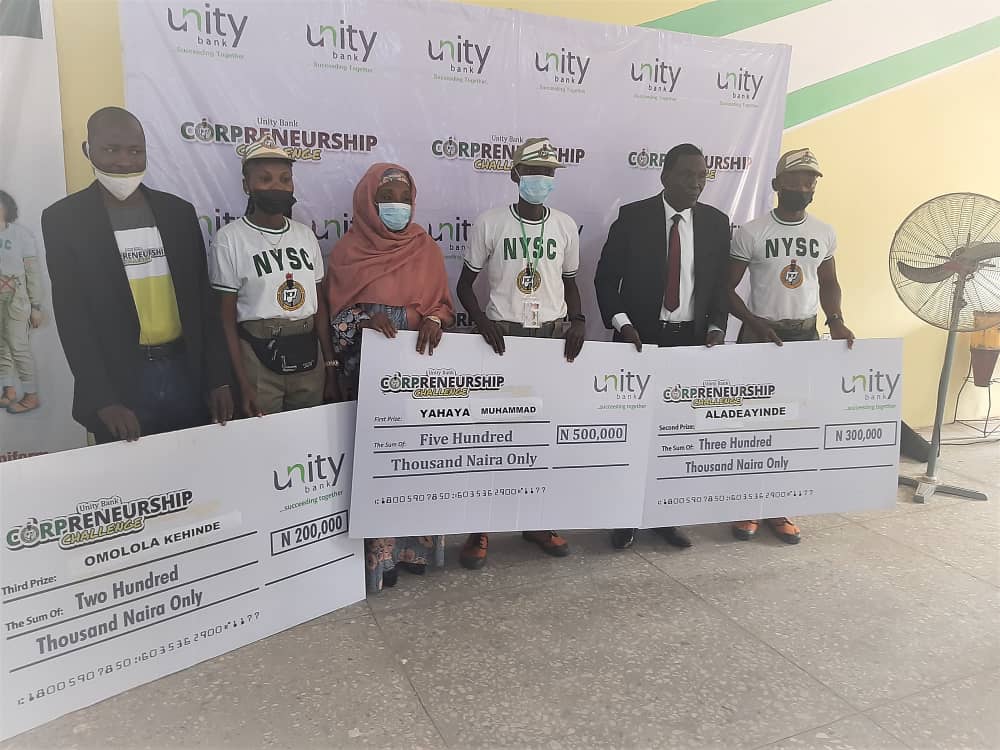 Unity Bank is currently in 10 states of the federation where three winners each emerged from the Batch B Orientation course in the Corpreneuship competition held last week.

Some of the winners included Yahaya Muhammad, Alade Ayinde and Omolola Kehinde in Kano NYSC camp, while Chiamaka Nweke, Nduke Oduobuk and Victoria Adesope emerged as the winners in the Enugu State camp.

One of the winners in Abuja, Ebingha Ogbe John appreciated Unity Bank for the opportunity, which she said, has helped her to showcase her business to the world. “I thank Unity Bank for making my project, Mama’s Ally Crashfish to come alive in this Abuja,” She said.

The initiative continues to attract increasing interests among the corps members, as over 2000 applications were received but only 100 were shortlisted for the pitching sessions from where the thirty winners emerged.

Recall that Unity Bank started the Entrepreneurial Development Initiative in 2019, to specifically target corps members, as part of efforts to contribute to job creation in Nigeria. It continues to gain traction, growing bigger and better in grooming corps members having successfully ran several editions of the scheme in partnership with the NYSC Skill Acquisition and Entrepreneurship Development, SAED.

The Bank has invested overN80 million in the initiative, which has now produced 58 winners since it was launched.

Speaking during the finale in FCT NYSC camp, the Divisional Head, Retail, SME Banking and E-Business Directorate, Unity Bank Plc, Mr. Olufunwa Akinmade, said the competition has proved to be a great tool for empowering fresh graduates in the country.

“The corpreneurship challenge is a creative entrepreneurial development initiative by Unity Bank in conjunction with the National Youth Service Corps, NYSC. It is aimed at driving job creation through entrepreneurship.

“With rising youth unemployment in the country, it is just common sense to consider the entrepreneurship alternative”.

“As the corps members join the labour market after their youth service, not every one of them will get the opportunity for a paid employment. But with what Unity Bank is doing, many of them will get the support they need to start a small business and even become employers of labour”.

“We encourage the corps members to take seriously the opportunity that the Unity Bank Corpreneurship has provided. And to those that have emerged the winners today, we ask them to utilise their grants judiciously. Unity Bank remains committed to empowering the youth through initiatives such as this, as we know that the bedrock of the economy is entrepreneurship.”

The Zonal Head, North West, Unity Bank Plc, Mr. Mustapha Idris Baba, implored the winners to judiciously utilise the funds to support the business venture that got them the grant.

This edition follows the expanded Corpreneurship Challenge which started in the 5th edition in June this year. The programme looks set to expand nationwide, empowering corps members to explore entrepreneurship alternatives in the face of rising youth unemployment in the country.

Related Topics:Unity Bank
Up Next

FIRSTBANK SPONSORS DUKE OF SHOMOLU PRODUCTION; AS AWO AND AREMU HITS THE STAGE