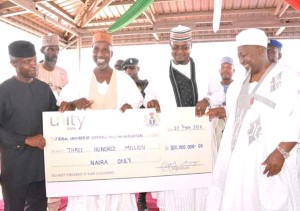 The Federal Government has formally flagged off social welfare initiatives code-named ‘Trader Moni’ in partnership with Jigawa State government and Unity Bank Plc with the initial sum of N300 million.

With a total of N1.5bn earmarked for the initiative, the scheme is meant to accelerate an on- lending through Unity Bank to about 35,000 Jigawa petty traders

Vice President Professor Yemi Osinbajo who was in Jigawa for the launch of “Market Moni” presented the Unity Bank Cheque through the Chairman, Jigawa State Chamber of Commerce Mines and Agriculture (JICCIMA), Alhaji Shehu Muhammad Sunusi.

According to the Regional Manager, Unity Bank Plc, in Jigawa State, Mustapha Baba, the Bank is in good stead to facilitate the massive on-lending scheme to the benefit of Jigawa petty traders, not only as it has continued to identify with the genuine aspirations of the government and people of state, but also to support the Bank’s pursuit of financial inclusion which has dominated its business objective for some time.

Baba explained that arrangements have been made for the bank to begin direct disbursements to selected beneficiaries/small businesses in the state as intervention fund on behalf of the State Government/JICCIMA.

The Federal Government through the Bank of Industry (BOI) and the Government Enterprise and Empowerment Programme (GEEP), recently launched ‘Trader Moni’ in Lagos, a product through which traders could access loans of up to N10,000 at the first instance.

Mr. Mustapha further explained that farming equipment such as tractors, planters among others, will be distributed to farmers in the state.

The Unity Bank Cheque of N300million presented by the VP to JICCIMA on behalf of the state Government, is at zero per cent interest rate.

Under ‘Trader Moni,’ traders don’t need any documents or property to collect N10, 000 loan from the Federal Government. They only need to register, get captured and receive the money through their phones. The repayment plan is for six months and beneficiaries would pay a paltry N250 interest on the N10, 000 and qualify for a bigger loan thereafter.