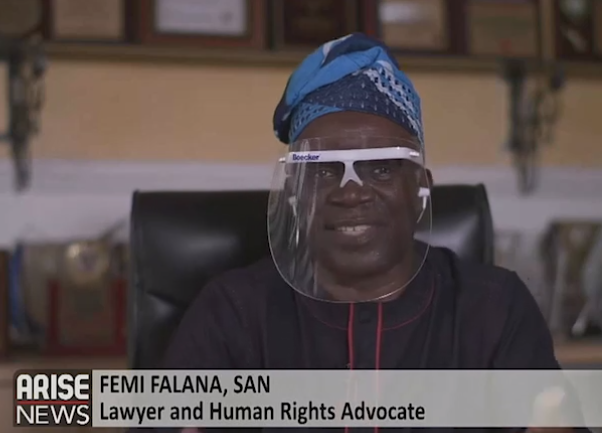 Femi Falana the Chairman of Alliance on Surviving COVID-19 And Beyond (ASCAB) has revealed on Television that they have identified the barrack the soldiers came out of from.

NAIJA NEWS NG reports that Femi Falana revealed this while speaking on ARISE TV on Monday, October 26 . The erudite lawyer said his group has been able to trace the barrack the soldiers came from.

The President was likely to have been told, soldiers were ordered so I want to believe that’s why it was not addressed and they said it was a rumour but I think the facts are emerging now, that indeed soldiers went to Lekki, indeed they fired at protesters and indeed some of the protesters at least two have been officially acknowledged to have died from gunshot wounds.” Falana said

He said ASCAB would establish an independent panel of inquiry to investigate the October 20 shooting of protesters at Lekki toll plaza.

“ASCAB shall establish an Independent National Citizen’s Panel of Inquiry under a number of conditions Composition of the Citizen’s Panel of Inquiry shall comprise representatives of credible and identified organisations of the youth that took part in the #Endsars protest movement, including the Feminist Coalition, among others; representatives of credible and tested civil society organisations,” he said