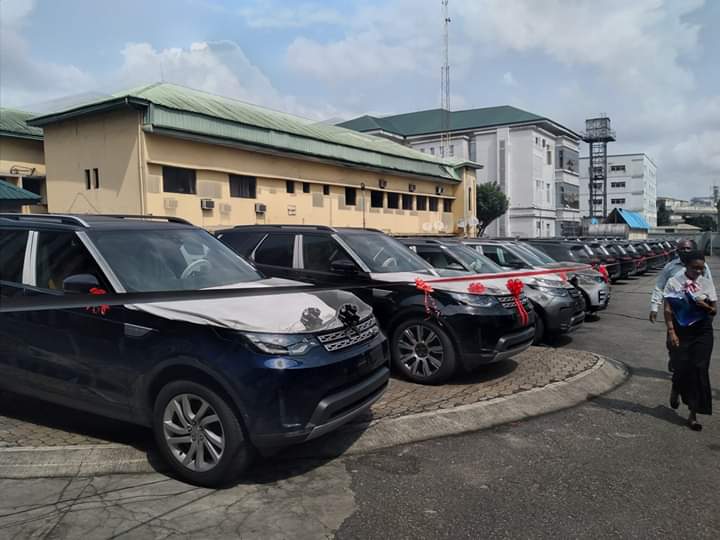 NAIJA NEWS NG brings you the reactions of Nigerians on Twitter on this , read below :
Buhari’s Sister @DaminaboEric
“Nyesom Wike has given a total of 41 Range Rover Discovery Sports Utility Vehicles to Judges serving in Rivers State High Court and Customary Court including Judges of Rivers State origin serving the nation in the Federal Judicial Service..”

Dear Edo APC, this is the time to sit up. Wike has started playing his usual game, He shouldn’t be allowed to frustrate the APC in edo through the courts like he did in Rivers State.”

“As gov Wike bought RANGE ROVERS for the judiciary in his state and refused to patronized INNOSON MOTOR wailers see nothing wrong with that, But if Buhari did the something, wailers will start by saying he buy judiciary and then say he killed INNOSON MOTOR.”

akanbi ola @akanbiola1
“One Million youths Movt for Wike, don’t worry you Pples’ Corolla is on the way, patapata Keke napep go reach una.
Since that’s the best advice he could get in this pandemic era, no empowerment for the Youths, no job employment opportunity unless u fit do taskforce. Meka ooooooo”

QUDUS @QdPaper
“Wike is the man of the people on twitter cause he rescued obaseki in the hands of Godfather.

“This is rubbish. Governor Wike has no respect for judicial independence. I have a problem with this report. A governor is not in a position to donate “gifts” to judges. It is nonsensical. If judges need vehicles, the Judicial Service Commission is supposed to provide same.”

“Wike suspends all taxes across the State for SME, including shop owners & hairdressers for the yr 2020. Also suspended are all LG taxes & levies with the exception of tenement levy. He reportedly made this move in a bid to cushion the impact of COVID19 in d state”

“Gov Wike didn’t give them Cars, the Rivers state Government of which the Judiciary is an Arm received Cars to help them enhance there work, it’s a statutory entitlement!!!

If you have a judge as a relative you will know how hard those guys work, we don’t thank them enough!!!”

Atiku , Saraki And Kwankwaso Speak On Returning To APC

We Are Appalled By The Worsening Security Situation – Nigerian Governors Write